“As an Energy Healer  what do I see when a client performs the Microcosmic Orbit?

When a client performs the Microcosmic Orbit exercise I see their energy begin to repair itself right throughout the body, I see stress levels decrease and I see biological systems balance and harmonize… the cells generate more light and the body begins to glow.” Lyza Saint Ambrosena

The Microcosmic Orbit also known as the ‘Self Winding Wheel of the Law’ and the circulation of light is a Taoist Qigong or Taoist yoga Qi energy cultivation technique. It involves deep breathing exercises in conjunction with meditation and concentration techniques which develop the flow of qi along the body’s energy meridians. The exercise can be performed usually at first in a sitting or lying position, then practiced standing . The clear understanding of the microcosmic orbit technique is very important not only because of its historical context in the story of Chinese alchemy but because it is at the heart of many Taoist forms of exercise performed throughout the world by many millions of people today. 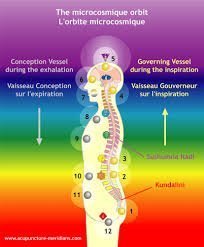 What is the microcosmic orbit?
The microcosmic orbit in Qi Gong refers to the energy circuit composed of the major yang channel and the major yin channel or energy meridian in the human body.
The major yang channel runs from the perineum (the central point between the middle of the legs) up toward the coxyx/base of the spine. From the coxyx it runs up the spine and enters the skull at the base of the neck, continuing up the back of the skull to the crown of the head.
The major yin channel of the body runs from the crown of the head down the middle of the front of the face to the palette, and then from the tongue down the front of the neck, chest and abdomen down into the sexual organs. Finally it runs from the sexual organs to the perineum.
So, the yang channel runs up the back of the body, and the yin channel runs down the front of the body, connecting with each other at the crown and the perineum to form a loop or circuit of energy. This is why it is called the “orbit”, it is the major circuit of energy found within the human body,

Microcosmic Orbit Meditation – position of body/spine
This meditation can be done seated or in the basic Qi Gong standing posture , the former is slightly easier regarding developing deeper concentration, but the latter encourages the flow of Qi through the body more strongly. The main thing is that your pelvis should be aligned in such a way that your spine and torso can rise in a comfortable and erect manner, supporting the head and neck, which should be in line with the torso.
It is particularly important to have your tongue connected to the roof of your mouth, the tip placed just behind the top front teeth. This enables Qi to flow down from the pallet of the mouth down into the jaw and neck effectively.

After having found a comfortable posture, the next step is to sink your center of gravity down into the belly, so that the upper body is nice ad relaxed.

Turn your attention to the natural process of your breathing, give a little bit of time for your mind and body to settle. If you like you can practice a few minutes of simple Qi Gong meditation forms such as the core body breathing, or the inner smile.

The basic visualization:
When you feel ready, imagine there is a circuit of energy and light, about 3cms in width (like a hose pipe perhaps) running from the perineum (the point between your sexual organ and your anus)  up through the spine and back of the neck and head to the crown. From the crown it descends down the front of the face, in through the top of the mouth to the tongue, then down through the neck, heart, chest, belly button and abdomen returning back to the sexual organs, and underneath, completing the energy circuit at the perineum.

Feeling and seeing the flow of energy:
Spend a little while seeing and feeling this energy circuit, feeling its presence. After a while notice that energy is gently rising up the back of the body along the energy circuit, from the bottom of the spine to the crown of the head. You can also feel energy and light gently descending down the front of the channel, down your head, neck and torso, into your sexual organs and from there to the perineum.
Spend a little while gently seeing, feeling and sensing this energy flow up and down the microcosmic orbit. The energy may seem to be flowing in a continuous, gentle way, or it may ebb and flow somewhat. Don’t try and control it too much, just allow it to move naturally.

Concluding the meditation:
I recommend that you finish the meditation with just a few minutes of silence and pure relaxation, just to allow the energies in your body and in the microcosmic orbit to settle down and find their natural point of balance.